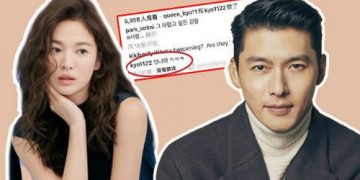 Hyun Bin- Song Hye Kyo shook hands with each other – Will sue the culprit for spreading rumors they have baseless dating!

Hyun Bin- Song Hye Kyo shook hands with each other – Will sue the culprit for spreading rumors they have baseless dating!

Hyun Bin- Song Hye Kyo shook hands with each other – Will sue the culprit for spreading rumors they have baseless dating!
When false rumors about dating go too far, Song Hye Kyo and Hyun Bin will take legal actions to sue the initiator.

In recent times, Asian media has repeatedly released conjecture articles about the couple Song Hye Kyo and Hyun Bin “love again from the beginning”. Things started arousing from China’s social network Weibo back on May 19, both of whom are suspected of having a romantic relationship.

Netizens discovered some subjective evidence according to personal arguments. First, the actor’s stylist, born in 1982, followed the star’s descendant’s Instagram account. Some pictures of natural landscapes and trees updated on the internet by Song Hye Kyo are similar to the location where Hyun Bin filmed the ad.

Next, they said that Song Hye Kyo wore a necklace with the letter HS – supposedly similar to the initials of Hyun Bin and Song Hye Kyo. Finally, actress Park Sol Mi uploaded a video screen of the song titled Oh Tears, Oh Sadness by Soya – the soundtrack of the World TV station they live on KBS. Reportedly, this is a movie starring the couple, which aired in 2008. Under the post, Song Hye Kyo left the following comment: “Sis, hahaha”.

Not stopping there, the question of Song Hye Kyo and Hyun Bin dating continues to become the focus of discussion when many media outlets repeated this topic many times. Most recently, netizens discovered Song Hye Kyo leaving a rose comment in a wedding anniversary photo of Hyun Bin’s stylist.

Before the report, many people doubted and wondered whether this was true or not. However, most are just conjectures from fans who want to pair Song Hye Kyo and Hyun Bin. In fact, this is quite “fictional” and the evidence given is unfounded.

If rumors of unknown origin and unfounded continue in the future, it is likely that speculation sources to release rumors will be in trouble in the court. Because, both Song Hye Kyo and Hyun Bin have made statements to take legal action with rumors that greatly influence their image.

Earlier this year, Hyun Bin’s agency VAST Entertainment said that it took legal measures to deal with the spread of malicious and false rumors about the actor. The representative expressed:

“We are currently collecting false evidence and malicious rumors to protect the rights and interests of our artists. We expect our fans to send us direct information if they meet. must be malicious rumors. We thank you “.

“Actress Song Hye Kyo has filed a complaint at the Bundang Police Department against those who violate the law of defamation and insults. After completing the gathering of evidence related to the malicious behavior, spread Spread false rumors, slander, we will appeal to all netizens.

Regarding the filing of a complaint, we inform you that we will take strong action without mercy or negotiation. We plan to take legal action against anonymous people creating and spreading indiscriminate rumors. ”

In October of the same year, the rumor Song Hye Kyo divorced Song Joong Ki because of an alleged affair. This person violated the Information and Communication Network Act.