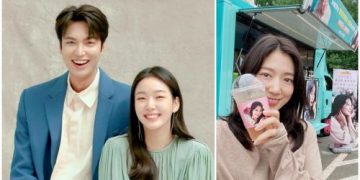 1. Lee min ho got caught up in dating rumors with Kim Go Eun.
After the success of The King: Eternal Monarch, Lee Min Ho and Kim Go Eun received great attention from the fans.
Earlier on July 7, an account posted on Pann wrote: “Lee Min Ho is definitely dating Kim Go Eun” with a series of photos, attracting more than 240,000 views and discussion.

The first is a walking video by the Han River that Lee Min Ho posted on July 2 – Kim Go Eun’s birthday. The actor sang the song Dancing Universe – the soundtrack of The King: Eternal Monarch – with the lyrics: “This universe is a place where you and I dance. A place for us to hold hands tightly. It feels like a dream.” . The video attracted over 4.6 million likes and hundreds of thousands of comments, most of which mentioned Kim Go Eun’s name. The author compared the images of the two actors posted on the same day with similarities in the context, objects … showing that they were together for Go Eun’s birthday.

Posts quickly attracted the attention of the online community. Most viewers believe they are dating. Minzy’s account wrote, “They are so beautiful and at the age of maturity to enter into a relationship. Lee Min Ho – Kim Go Eun, be happy.” Meanwhile, the audience member Hoojun commented, “Lee Min Ho likes Kim Go Eun through his eyes. What a special girl.”
At the moment, both of them have not yet spoken about the rumor.
2. Park Shin Hye received a surprise from a former colleague!

Park Shin Hye showed a picture of her standing next to the coffee car that Lee Sung Kyung sent to Sisyphus: The Myth Film Studio to support and care for Park Shin Hye’s close friend yourself.

Park Shin Hye has recently created a craze across Korean cinemas due to his collaboration with actor Yoo Ah In in the movie #ALIVE. Park Shin Hye is currently filming for an upcoming JTBC drama titled Sisyphus: The Myth.
Park Shin Hye was in for a surprise from her Doctors’ co-star Lee Sung Kyung when she walked into the sets to film.

She shared a picture of a coffee truck she received from the actress. “Even before we started filming, Lee Sung Kyung supported me through prayer and now she’s sent a coffee truck! Your support has even gotten the rain the stop, right?” she captioned the photo.
The gift came along with a banner that read, “I support Sung Dong Il and Park Shin Hye, whom I love. Good luck to ‘Sisyphus’!.” Another set of banners read, “Park Shin Hye, don’t get hurt and have fun filming. I’m totally praying for you and supporting you, you know that, right? I love you,” and “Sung Dong Il, I love you. Good luck to Cho Seung Woo, Tae In Ho, and everyone at ‘Sisyphus’!”
Park Shin Hye and Lee Sung Kyung became close friends after working together on Kdrama ‘Doctors’.