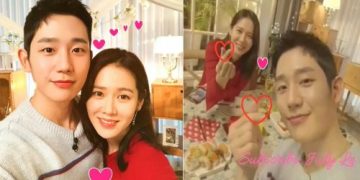 So in the face of dating rumors, what did Jung Hae In and Son Ye Jin say?

How did Jung Hae In and Son Ye Jin talk about their dating rumors?
You may not know – Not only this time Son Ye Jin was caught up in rumors of dating actor actor Hyun Bin, but Son Ye Jin 2 years ago had been entangled in dating rumors with Jung Hae In in 2018 right after the movie Something in the Rain ended.

So in the face of dating rumors, what did Jung Hae In and Son Ye Jin say?
In a joint interview of two stars with TVReports, Jung Hae In shared, “People didn’t ask me ‘Are you dating?’ and asked ‘Are you dating?’ or ‘I heard you’re dating’ without even talking. ” When asked about the possibility of a real life relationship with Jung Hae In, Son Ye Jin evaded, “I want to let Jung Hae In answer this question more.” And Jung Hae In continued, “People around me kept saying, ‘Why don’t you two date?’, ‘If you two date, I’ll support’. Ye Jin and I even have talked to each other about this issue “.

In the end, Jung Hae In frankly stated, “However, what we filmed was originally a drama, not a documentary. It’s all just fiction and lies. But instead of lying, I tried to show my sincerity every moment, and we received feedback that made me think that my sincerity was successfully conveyed. to some extent. And again, you never know what might happen. ” The “closed down” statement of Jung Hae In made fans even more confused.

As for Son Ye Jin, she shared her feelings about being pushed into a boat with Jung Hae In: “When I was filming this movie, I heard a lot of people ask if I was really dating Jung Hae In. Or not, I’ve been in a lot of love films since debut, but when I did this movie, many people around me especially asked about dating. , so I reviewed the clips and pictures we shot. Everyone had their own image and arrangement, but Jung Hae In was very similar to me. When we filmed a scene together, we I have a strong sense of harmony, so I think that’s why people think we have feelings. ” In the end, Son Ye Jin still did not confirm, deny, nor mention the focus of her love relationship with Jung Hae In.

At the end of the interview, Son Ye Jin concluded with praised words for Jung Hae In and his future potential.