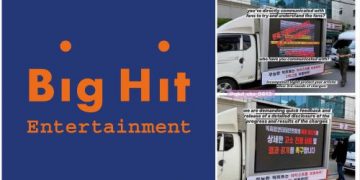 Fans are angry at Big Hit Entertainment for their slow actions and have sent a protest truck to stand in front of the company's building.

by admin
in K-Music, CELEB, NEWS
0 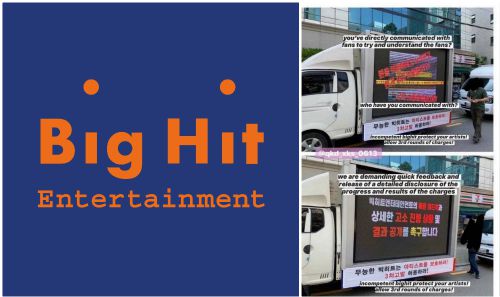 On June 29, Big Hit Entertainment began to conduct their legal proceedings against netizens for malicious activities after a very long time fans asked them to reorganize their responses. about malicious and threatening comments. .

However, many fans of the BTS group were angry at Big Hit Entertainment’s slow response.
The fans who could not wait any longer for Big Hit’s response gathered together and staged a truck protest. 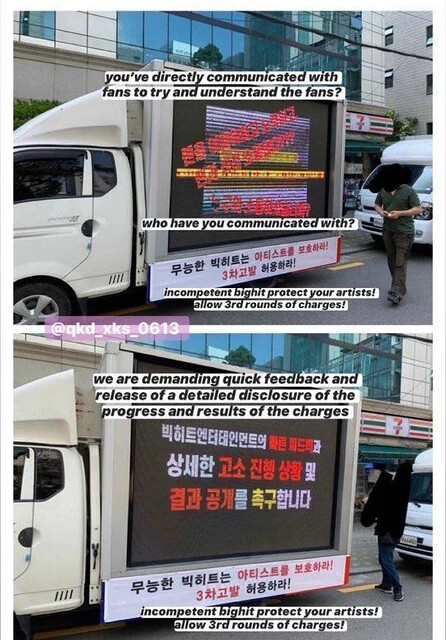 The protesting truck is parked right outside of the company building and shows slides with lines stating “Have you tried to understand fans and tried to communicate with fans????”, “Who have you communicated with?”, “We are demanding quick feedback and the release of detailed disclosure of the process and results of the charges.”

On the banner, right underneath the screen, the quote reads “Incompetent Big Hit protect your artists. Allow the third round of charges.”

However, the fans are claiming that many haters are still active without receiving any legal punishments despite the reports and appeals made by the fans. Thus, the fans have planned this protest hoping to bring a difference to the situation.

“What do they mean sue every hater?? What do they sue them for?? Most of them are probably little teenagers that think its funny to send hate. I dont think they’re gonna go through every single hate comment and try to sue the person. Just seems like a waste of time. Haters are always gonna be there even if you try to get rid of them.”
“I’m a fan and don’t want anything bad said or done to any of them but what good will this truck do. I know the fans are trying to be supportive but can you imagine how the artists must feel when / if they see this parked outside.

I don’t know much about the legal system but surely its a matter between Big Hit and everyone involved in the legal proceedings. Why should they have to release every single detail.”
“I think this truck is a good idea if it gets Big Hit moving. The haters get sued and the members are left alone. Everyone’s happy. The end.”