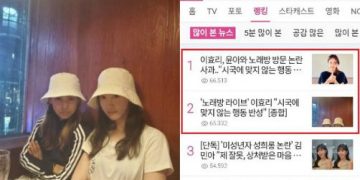 Lee Hyori and Yoona's careless actions caused a big controversy on Korean social networks. The two stars had to apologize formally for the wave of protest was too great.

Late at night on July 1, Lee Hyori livestreamed on her personal Instagram, with Yoona (SNSD) appearing in a karaoke room. Lee Hyori said she and Yoona went out for a beer together and went to a karaoke bar in Apgujeong. However, the two did not wear a mask in the context of the complicated situation in Korea due to the effects of COVID-19. The incident became so serious that the two idols had to apologize but the public still did not calm down, the reason is because before the previous two cases of Jungkook and idol friends, beauty friends Lee Min Jung, Hyomin (T- ara) … going to a bar at an outbreak that shocked Korea.

From morning till now, the news of apology for carelessly wearing a mask during the COVID-19 season of Lee Hyori and Yoona (SNSD) has been standing in the top 1 of Naver’s hottest – big portal. Korea, proving the public’s interest in this incident.

Livestream after less than 2 minutes, but with tens of thousands of views, the image of 2 female singers without masks, gathered to sing karaoke became the focus of Korean social networks and sparked a fight. argue. 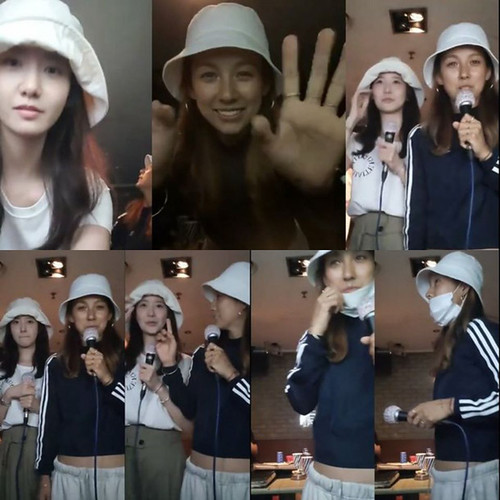 – Who are influential people like Lee Hyori and Yoona who are gathered and not wearing masks like this?

– Too careless, disease can break out at any time.

– Oh, both of you did the Thank You Challenge, if you did, you would gather and keep gathering.

– I doubt the Thank You Challenge of artists.

– With their influence, the fans will think that going to karaoke today is still very safe.

– It is so thoughtless, do you know how hard the frontline medical staff is?

– Why not go to a gathering and wear a mask at this time?

– Gathered up and then livestreamed to let the world know …

But there are also opinions to defend the two female singers, saying that karaoke bars are still in business, so Lee Hyori and Yoona come to sing is completely normal. The shops also have their own safety procedures, so going to sing in the middle of this time is not worrying.

– Before entering the restaurant, people must also check the body temperature, wash their hands and sign it. Karaoke bars are still in normal business. Stop the “at this time” song.

– Now is not the time to socialize anymore, it is just to prevent epidemics.

– Ordinary people go to karaoke too, stop seriousing the problem.

– The government allows trading and implementing strict epidemic prevention measures, nothing to worry about.

– Anyway, I find it not so good to go drinking and singing karaoke. It’s okay to go in silence, but people with such public influence will be subjective and follow fans.

– Not drunk driving, playing drugs, sexually harassing … Just a little careless. Hope people do not be too strict.

In the midst of this “strain”, both Lee Hyori and Yoona’s agency ESteem Entertainment and SM Entertainment have not yet spoken, both female singers quickly apologized to the public on their personal pages.

I deeply regretted my actions last night. What we do is not right, in the context that everyone still has to be careful about the disease.

In that moment, I was so excited that I acted without thinking.

As an older sister, I also apologize to Yoona.

I will be more cautious in the future.

Once again, I’m sorry to all …

First, I sincerely apologize for my thoughtless actions.

I acted recklessly at a time when many people were still struggling with the epidemic. In the future, I will be especially careful with my actions.

I deeply regret not being able to recognize the hard work that doctors are facing against the disease, as well as the people’s vigilance in the context of a lot of risks.

Once again, I’m sorry that I worried many people.

The sincere and quick apology of the two female singers made the netizens somewhat less strict, but others still strongly condemned. In the context of South Korea still having an average of 45 new cases of COVID-19 infection, the Government has continued to push strong measures to combat the epidemic, the actions of celebrities like Lee Hyori and Yoona are still is very careless, thoughtless. Especially when people have a great influence on the public, they need to be even more cautious in their actions.