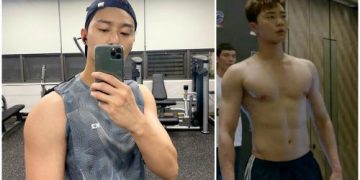 Park Seo Joon posted a picture of himself in the gym with a funny caption as he prepared to film Dream with IU.

According to Soompi, Park Seo Joon is currently in the process of preparing to film the movie Dream, starring with IU. The movie is about a group of people trying to attend the Homeless World Cup, an annual international football event.
Park Seo Joon plays Yoon Hong Dae, who leads the group. He was originally a professional football player but unfortunately had to be disciplined after causing a disastrous incident. Reluctantly becoming a football coach, but over time, he gradually became a true leader, always trusting and treating his teammates sincerely.
On June 13, Park Seo Joon posted a picture of himself at the gym with the words, “In the process of becoming a soccer player Yoon Hong Dae”.

Shortly thereafter, professional football player Paik Seung Ho, who currently plays for German club Darmstadt 98, responded by leaving a comment with a series of emoticons.
Previously, Park Seo Joon said that he is excited because the upcoming time will be transformed into Yoon Hong Dae. “I will do my best to bring a great movie to the audience,” the actor expressed.
Dream is the latest film directed by Lee Byung Hun, who is behind the success of blockbuster missions and Melo is My Nature (JTBC). The work, starring Park Seo Joon and IU, is scheduled to premiere in 2021.
According to Soompi, JeA (Brown Eyed Girls) returned to music on June 12 with a new solo song called Greedyy. This is a song that marks the return of JeA after one year since the release of the single Newself. In particular, this song also has the participation of the lyricist IU.
After the song was released, IU went to her Instagram to share how she worked to create Greedyy. The singer said, “Greedyy was my first work of the year so I wrote it with a lot of energy and energy. The last song came out. It felt like wearing sunglasses on my head. and bask in the limelight! While writing the lyrics to this song, I was really happy ”