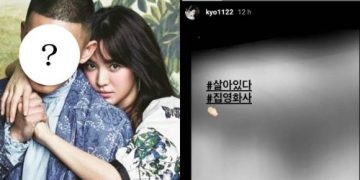 After Song Joong Ki’s overseas activities after divorce, Song Hye Kyo recently made his first noticeable move after returning to Korea. Specifically, the beauty “Descendant of the Sun” has posted a story story to attend the VIP event of the movie premiere of “Alive” to support an extremely close character – actor Yoo Ah In.

Notably, this is the first time attending Song Hye Kyo’s Korean event since the divorce with Song Joong Ki. Through this can prove the rare closeness between Kbiz of Song Hye Kyo and actor Yoo Ah In.

It is known that Yoo Ah In is always a junior, a close friend of both Song Hye Kyo and Song Joong Ki. He used to appear intimate and was invited to the couple’s wedding in 2017. However, after the two divorced, Yoo Ah In only had a close relationship with actress Song.

Previously, after a noisy trillionaire divorce with actor Song Joong Ki, Song Hye Kyo had a long time to avoid Korean media. Even the actress only accepted to attend events abroad and rarely appeared publicly in Korea. Now, the most expensive single lady in Korean showbiz is currently happy, happy, not interested in marketing and dedicated to her career.