So Ji Sub And His Wife Donated 100 Million Won To Help Communities In Need .

After the divorce, Song Hye Kyo headed into work, traveling with friends, enjoying a single life, ignoring rumors of adultery, ...

Recently, a netizen on Twitter unexpectedly re-shared the interview of Song Hye Kyo in Korean magazine Elle in June 2015.

In this interview, Song Hye Kyo shared about how she faced criticism from the public. “I became stronger after facing big waves. I got criticized so much that I don’t even care about it now.I think I’m much stronger in front of such pain”, “Song Hye Kyo shared. 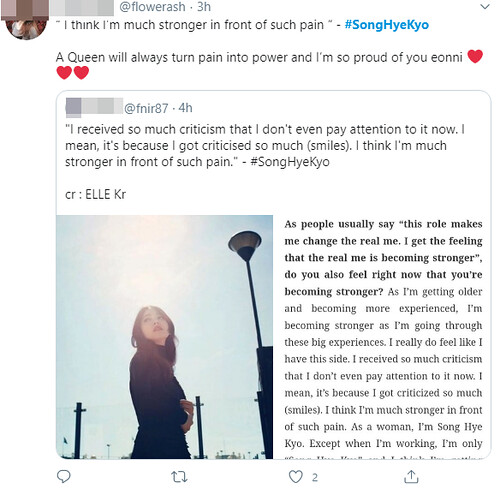 Actress “Descendants of the Sun” also revealed how she faced off-going relationships. “It sounds weird but I feel like I always enjoy those pain. I think there should be times when people need to face the pain that others bring to them”, Song Hye Kyo said. .

“Of course, I can still do all these things now, but if I do and I hear stories about me, it’s hard because I’m the type to torment myself. As people usually say “this role makes me change the real me. I get the feeling that the real me is becoming stronger”

Song Hye Kyo added, “A lot of people have hurt me but I have given them several opportunities. However, others will completely cut off the relationship. It doesn’t matter if the person is male, female or even close friends, once the relationship is over, I think it’s completely because we have a gap. Instead of continuing a relationship that doesn’t go anywhere, I choose to end it myself. and then I will spend more time with myself. ”

From the above share, many people have thought of Song Hye Kyo’s conduct in a century divorce with Song Joong Ki. It can be seen, from the time the rumors spread until the declaration of divorce, the person who announced it was Song Joong Ki completely. Song Hye Kyo never spoke, she just silently deleted all photos with Song Joong Ki on her personal page. After the divorce, Song Hye Kyo headed into work, traveling with friends, enjoying a single life, ignoring rumors of adultery, …