Kim Soo Hyun and Ji Chang Wook: The two male actors has the most muscular, masculine body in Korea!

Everyone knows that after the success of Crash Landing On You, both Son Ye Jin and Hyun Bin made the audience extremely excited, the group of fans tried to “push the boat” for the couple to have a beautiful ending in real life. 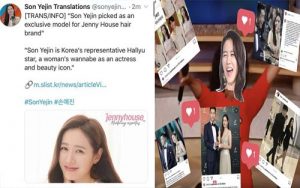 The QQ site and a series of Chinese bloggers reported that Son Ye Jin was posting nearly 20 posts on social media with the content of pairing the actress with Hyun Bin today.
This has led many to believe that Son Ye Jin and Hyun Bin are in a real dating relationship.

Netizens of China discovered Son Ye Jin like nearly 20 articles with the content “pushing the boat” on her and Hyun Bin. Among them, an account with just more than 300 followers is also Son Ye Jin “eye”. The post read, “One of my favorite Kdrama couples is the Riri couple. I hope you can be together.”

One fan counted Son Ye Jin liking nearly 20 posts, in addition to asking, “If you didn’t want to go public, you wouldn’t have liked this many posts”.

On QQ, Son Ye Jin’s actions were discovered by fans in the middle of the night. This clearly shows that Son Ye Jin purposely searched for posts related to the two.

Previously, Son Ye Jin also took the storm by revealing photos like the pairing posts of her and Hyun Bin including the side-by-side photos together with “sensitive” hashtags such as # Binjin Couple, #binjinlovers, #binjing grocery, # The Binjin couple is real.