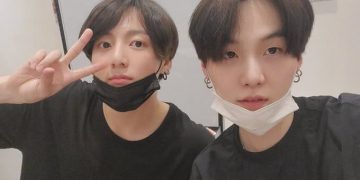 Netizens of Korea got mixed reactions after hearing that Jungkook had apologized to the Itaewon scandal.

Through the live broadcast of DJ Suga’s Honey FM 06.13 on June 6, Jungkook personally apologized after the Itaewon Club controversy in late April. Back on May 18, Dispatch posted a news of a close friend born in 1997, including Jungkook, Cha Eun Woo, Mingyu, and Jaehyun, who went to Itaewon entertainment venue on the evening of April 25 until the dawn of June 26. Then, following the government’s orders, all were forced to undergo medical examinations and this was also a period of social separation in Korea.

Taking this opportunity, Jungkook decided to open his heart and share some emotional feelings with his fans after causing controversy. Jungkook said, “It has been a long time since I greeted everyone, and it has been a long time since I appeared on a radio show, so I was really nervous. I participated in this radio show with Suga. At this moment, I am very happy to be able to chat with all ARMYs that I personally missed the opportunity to meet. I was nervous even before I started talking to you all.

In recent times, I think a lot of people have been upset with me or their hearts have been hurt just by their foolish actions. I am really sad for those who are struggling with the current situation, those who are working hard everywhere as well as the rest of BTS. Especially, I feel sorry for all my beloved AMRY. Because of me, everyone had a hard time, so my heart hurts.

I have reviewed myself during this time. I confided a lot with the hyungs (BTS members), then looked back and reflected a lot about myself. I want to tell everyone through this live broadcast myself. From now on, whenever and wherever I am, I will be more serious when thinking and doing things ”.

Here’s a response from Korean netizens from Newsen via Nate:

1. [+1,623, -875] People find the problem here is how Jungkook apologized after a long time, but you can argue about its downside. Because, being aware that you will bring this scandal back to the height of controversy after people have begun to forget to apologize. I believe that Jungkook took the time to ponder and I hope that he becomes mature and moves forward.

2. [+790, -471] Yes, reflect yourself and stop doing such things again. You are the one who helps our country to shine. It will be hard but work just to show your good side !!

3. [+620, -357] Thank you Jungkook for apologizing to your fans with his honest words. I know that it takes a lot of time to bring this issue back to the hotly debated topic when the media is no longer mentioned. I could feel the true reflection in my voice when he said that he had thought a lot and promised to be more careful in the future because of the people who were hurt. And we just want to see you in the positive news.