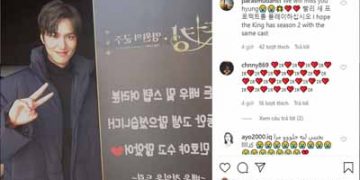 Jung Il Woo and Lee Min Ho always support each other in everything, they are really beautiful friendship of Kbiz!

Lee Min Ho shared a photo on his personal Instagram account, in which the actor smiled happily in front of a coffee truck banner sent by Jung Il Woo to the set. The male star said, “Min ho, you did well”. Previously, Jung Il Woo revealed that the two have been close friends since their school days. Last year, Lee Min Ho also donated a food truck to Haechi drama studio to Jung Il Woo.
After a serious car accident in 2006, both Lee Min Ho and Jung Il Woo became famous names, sought after by Korean people.

Lee Min Ho and Jung Il Woo were born in 1987, the two male actors who not only live near their home but also have been best friends since high school. In 2006, while hanging out, the two actors had a terrible accident that both had to be hospitalized for months and still have sequelae.