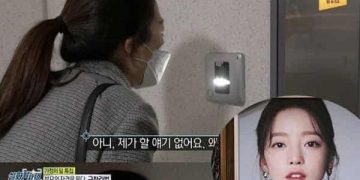 Goo Hara's mother continues to make people angry after the death of her daughter !!!!

When the reporter came to ask about her deceased daughter, Goo Hara’s mother refused to answer every question and kicked the reporter out of the house.

Since Goo Hara’s death, the noisy about the division of the family of female singers often appears on television programs, which is widely concerned. In order to clarify the actions that Goo Hara’s mother did at her daughter’s funeral, the reporter of “MBC’s True Story” met this woman. However, the mother of the late singer refused to answer and even fired the reporter.

Specifically, in the latest episode of the program, when asked by reporters about the negative behaviors at Goo Hara’s funeral, the mother replied, “No. I have nothing to say. Why are you doing this? ”. Later, when the journalist continued to ask for more information about the property war with his son, the woman said: “I have nothing to say. Please leave here. ” 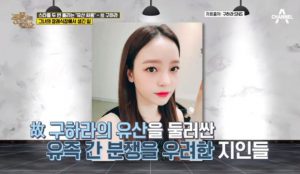 Not long ago, Goo Hara’s brother appeared on the show, accusing his biological mother to bring people to the funeral of the late singer to demand for a division of assets, constantly asking to take pictures with celebrities. Currently, her brother and mother Goo Hara are fighting in the legal battle related to the dispute of assets estimated at 10 million dollars that the singer left.