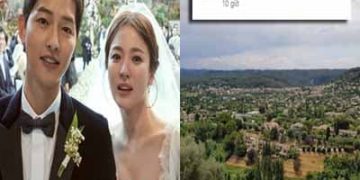 Over the past few days, rumors of Song Hye Kyo and former love Hyun Bin reuniting caused public opinion to stand still. At this point, fans are extremely curious about the reaction of the insiders and finally the cult star has made the first move on her personal Instagram page. Reportedly midnight, Song Hye Kyo posted 2 photos on this social networking site. These photos will not be worth discussing if the female star does not post the caption “Last summer”.

Many fans said that she was referring to the stressful time with her ex last year. On June 27, in the middle of the hottest summer of 2019, Song Joong Ki filed for divorce with Song Hye Kyo, causing Asia to shock. At 10am on July 22, Seoul Family Court officially closed the divorce record of Song Joong Ki and Song Hye Kyo, declaring the two officially divorced after 1 year and 8 months together. The golden couple of Kbiz became a stranger, deciding not to divide assets.

However, there are many fans that netizens are guessing rather than evidence. Song Hye Kyo probably posted photos merely tourism, nothing else as the public speculated. She is still enjoying a happy single life, working hard and traveling all over the place!