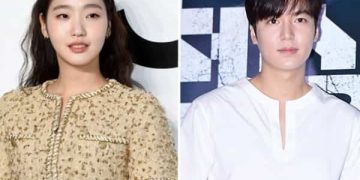 The script of “The King: Eternal Monarch” made Lee Min Ho unable to save the rating too badly!

The script of “The King: Eternal Monarch” made Lee Min Ho unable to save the rating too badly!

Although only 6 episodes have been broadcast, the movie "The King: Eternal Monarch" starring Korean star Lee Min Ho is still subject to much criticism from the audience.

“The King: Eternal Monarch” has been expected by the audience since the shooting since the film has the presence of Lee Min Ho, the most famous and favorite generation of South Korean generation 8x now. The film also marks the return of Lee Min Ho after nearly 3 years of absence to perform military service.

“The King: Eternal Monarch” is a film about the story of the parallel world. In the film, Lee Min Ho plays the Emperor Lee Gon, who is trying to prevent evil from entering the human world. He must collaborate with a detective in the modern world – Jung Tae Eul, played by Kim Go Eun to close the door between the two worlds.

Story after 6 episodes broadcast is still quite quiet, can not turn up the climax, dramatic. Emotions of the two characters and the details are somewhat discrete make the audience feel tired watching the movie.

Although the director also produced “The King: Eternal Monarch”, which praised the interaction between Lee Min Ho and actress Kim Go Eun, the audience did not feel it. The kiss scene of Lee Gon (Lee Min Ho) for Tae Eul (Kim Go Eun) was criticized for being awkward and bland. In addition, the scene of Lee Gon taking Tae Eul to the Korean world of the Empire using extremely weak, clumsy graphics techniques.

“I had a lot of expectations for the movie but now I’m just disappointed”, “This makes me realize how great Song Joong Ki, Gong Yoo and Lee Byung Hun are”, “Kim Eun Sook should look for Another writer supported me. The audience of her movie everyone knows that Kim Eun Sook was successful thanks to the writer Kwon Eun Sol “… is the contribution of the audience to” The eternal King “.

Sharing in a recent interview about his role in “The King: Eternal Monarch,” Lee Min Ho responded, “I had time to look back on myself. I needed to show a different image when I was 20, because now I’m in my 30s, I need to grow up and I think this is the right time to show that maturity in my acting. I”.

However, contrary to the expectations of the audience, Lee Min Ho’s acting in “The King: Eternal Monarch” is not really attractive and has a breakthrough.