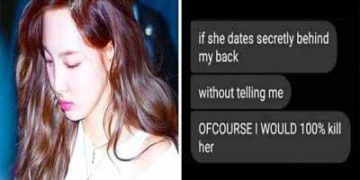 Shock- TWICE’s Nayeon was threatened ‘to be killed’ if she secretly dated!!

Shock- TWICE’s Nayeon was threatened ‘to be killed’ if she secretly dated!!

TWICE fans are frightened for Nayeon's safety when the idol received violent threats from a stalker.

TWICE fans are frightened for Nayeon’s safety when the idol received violent threats from a stalker.
Fans are urging JYP Entertainment to take action against the threat of violence

In late December 2019, a European Stalker known as Josh approached Nayeon when TWICE flew from Japan to Korea. In a deleted tweet, Josh admitted approaching Nayeon on the plane to send her a love letter.

‘The manager attacked me on the plane for no reason at all. I wanted to give nayeon my love letters and then the two managers jumped towards me. What the hell is going on? ’- Josh

⚠️⚠️⚠️PLEASE SHARE THIS⚠️⚠️⚠️ hi guys i would like to talk about a serious situation that is getting out of hand. nayeons stalker is getting out of hand and is planning after covid19 to come back to korea, we need to stop this, heres a thread of evidence #protectnayeon #savenayeonproject cr to people who own this evidence hashtag starters @_.taelicous._ @https.mitzi @blushie.angels @me @https.aannaaa @multifandomshit4 @woncvltre

After the incident, JYP Entertainment filed a complaint and asked for a restraining order. On March 18, Star News reported that the ban was temporarily suspended for delivery reasons, when Josh returned home to Germany at the end of January after leaking Chaeyoung’s phone number.

According to Star News’s JYP Entertainment, the criminal complaint against Josh has not been withdrawn, and the Immigration Department has been instructed to contact the police to escort this person directly when he returned to Korea. . Despite the protective measures taken for Nayeon’s safety, fans urged ONCE to approach JYP Entertainment to report new threats once again.

⚠️PLEASE SHARE AND READ CAREFULLY⚠️ thank you guys so much for your support so far! people have been sending me more evidence. so i’ve decided to post this!! lets stop him! cr to people who own this evidence hashtag starters @_.taelicous._ @https.mitzi @blushie.angels @me @https.aannaaa @multifandomshit4 @woncvltre

Below are photos taken by Instagram account @twicehugs shared, user accused Josh of threatening to kill Nayeon if she secretly dated someone else who ‘ignored’ him. ‘Every sane person will talk to her,’ a message showed.

In another post, Josh left a chilling message: ‘If she stealthily goes on a date without telling me, I will kill her 100%.’