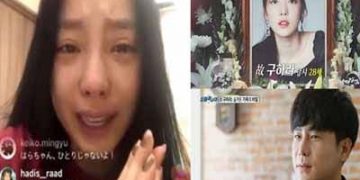 Recent details about the relationship between Goo Hara and mother made many people indignant .......

More than 5 months have passed since Goo Hara’s death, but the luxuriant grove surrounding the complicated relationship of the family of the late singer is still constantly updated by the media, causing a stir in the public opinion. Recently, many new details about the relationship between Goo Hara and mother before she died.
A close friend revealed that singer Goo Hara’s mother had long awaited the death of her daughter to take over her inheritance.
The singer’s mother is a rather old-fashioned person, showing her disdain for her many times when she gets caught in scandals like dressing up too sexy, …. After this information was revealed, netizens was shocked and especially indignant with this mother of Goo Hara.
Before her death, the singer asked someone to contact her mother and meet her after years of separation. A relative of Goo Hara said: “Hara asked me to find her help, she told me not to tell anyone. At that time, I just thought Hara was looking for her mother because she missed her mother. ” Psychologists have also advised Hara to see her mother once. But the ending is not as happy as the female singer expected.