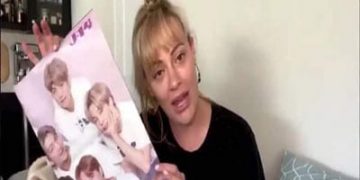 Bts - Army fans are angry at the attitude of American actress Shallon Lester ...

Specifically, after seeing the BTS promotional poster, the actress said, “We have BTS women. Look at these people. I don’t know whether to call them male or female, because I don’t know what they are. ”
The actress continued to comment on Jimin’s hair color: “Look here, you are an Asian man, you do not need to wear contact lenses, dye hair to become as outstanding as Ashleigh. You can look like an Asian man with black hair and dark eyes. “After that, Shallon Lester also followed J-Hope’s lips color, Jungkook’s hair color and called them girls.
Later, the actress made a similar comment about Monsta X. The actress continued, “People can’t fool me, this is also BTS. You can say this is Monsta X but they have the same hairstyle, these people look no different. So I don’t believe this is a different group. ” Shallon Lester continued to scrutinize and disparage Monsta X’s outfit. “What are these guys wearing. It looks like the clothes in the ad since 1996. This outfit is not pretty at all. What is going on in Kpop? ”.
After the intense criticism, the actress deleted this video from the Youtube channel.