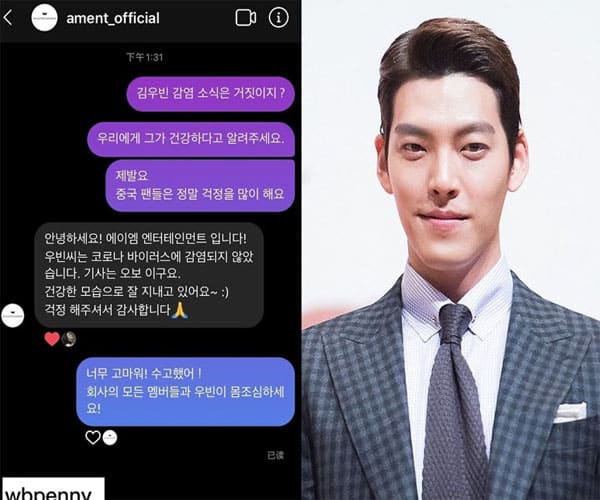 lovekpop95- The management company spoke up after learning that Kim Woo Bin was positive for corona virus!
According to Chinese and international media on March 18, a source was circulated that Kim Woo Bin was diagnosed with pneumonia, which is positive for COVID-19. They shared, Kim Woo Bin recently appeared at a press conference event and the staff conducted a temperature check. They noticed that the actor had an abnormal expression and then he was diagnosed with corona virus.

Immediately, Kim Woo Bin’s diagnosis was rumored on many social networking forums. Some reports of REX said that the news about Kim Woo Bin was completely false and at that time, the management company did not make any statement or deny before this rumor.

Fortunately, fans received a response with the following text: “Hello everyone. AM Entertainment. Woo Bin is not infected with corona virus. The article published is completely misleading. He is doing well to keep fit. Thank you so much for your interest. ”

Reportedly, Kim Woo Bin was diagnosed with nasopharyngeal cancer in 2017. He temporarily suspended all activities to take care of his health. After getting better, the actor returned in late 2019. Kim Woo recently announced his return to the big screen with Alien. The film is expected to begin filming on the 28th.