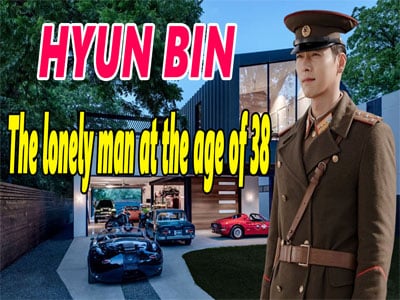 Despite having an impressive number of movies and a huge fortune, Hyun Bin is still lonely at the age of U40.

Hyun Bin is Korea’s top star
Crash landing on you is considered the most notable big blockbuster in early 2020.

However, it can be said that the biggest shot of the movie comes from the male lead – Korean captain Ri Jung Hyeok (Hyun Bin). Not only the girls are still sitting on the school chair, the old ladies also quickly become “hard fans” of actor Hyun Bin. The image of Hyun Bin’s serious but seductive Korean soldier still seems to leave behind, even after the drama is over.

Actor Hyun Bin’s real name is Kim Tae Pyung, 37 years old this year. He is famous for many television and movie productions such as: “My name is Kim Sam Soon”, “Secret Garden”, “Reluctant Partner” … The actor is currently one of the actors who has prestigious and most sought after in Korean showbiz.

At the age of 37, the actor possesses a huge fortune but is still lonely. Hyun Bin had previously proposed to get married before the age of 40, but currently does not have “suitable subjects”. He experienced many love affair with beautiful female colleagues: Hwang Ji Hyun, Song Hye Kyo (3 years), Kang So Ra (1 year).

According to statistics from the Korea Business Research Institute on February 29, Hyun Bin led the list of the most popular TV stars in February, based on online searches, frequency of media appearances, price. commercial treatment … At the age of 38, the actor holds the top star position, one of the top actors receiving the highest salaries in Korea.

The Munhwa Il-bo newspaper revealed that Hyun Bin’s salary for each TV episode exceeded 100 million won (nearly $ 83,000). He is also given a percentage for the royalties on movies aired overseas. Each episode, he receives about 150 million won.

Hyun Bin’s income also comes from advertising contracts, he is currently the representative of many brands of sportswear, cosmetics, drinks … Along with that, he owns the real estate in the downtown area. Seoul. In 2013, he bought a building in Cheongdam-dong (Gangnam District, Seoul) for 4.8 billion won ($ 4 million). Currently the building is worth more than 10 billion won ($ 8.2 million). He also named the luxury apartment in Heukseokdong that cost 3 billion won in 2011. The actor also bought his parents an apartment on the same floor.

In addition to being an actor, Hyun Bin is currently the owner of HB Family Holdings – the company he founded in 2007. The company is headquartered in the building he bought in Gangnam district, with 7 floors and more floor space. 360 m2. When Hyun Bin bought the building and renovated it, it cost about $ 4.8 million, but it has now reached more than $ 10 million, according to market prices.