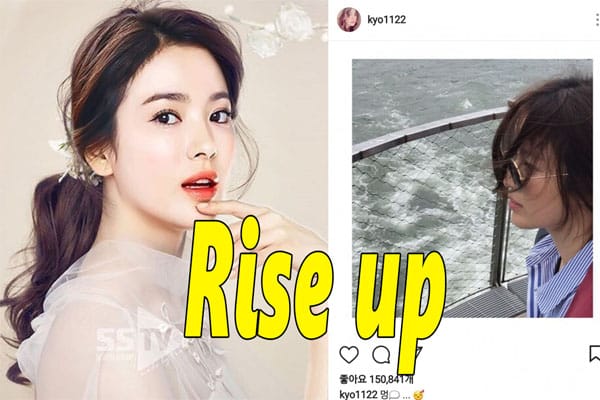 Give up Song Joong Ki – Song Hye Kyo’s rise up after divorce!

Give up Song Joong Ki – Song Hye Kyo’s rise up after divorce!

lovekpop95- Give up Song Joong Ki – Song Hye Kyo‘s rise up after divorce!

Not wailing about a broken dream marriage after 2 short years, no sadness and collapse to avoid the media, Song Hye Kyo lived a strong, happy and brave life after a shocking divorce with Song Joong Ki.
Recently, a friend of Song Hye Kyo posted photos of the real life of the famous Korean actress on social networks. In the picture, the beauty of “Descendant of the Sun” has a “bare face”, wears a simple coat and smiles radiantly. Song Hye Kyo’s bright but casual image is praised and supported by fans. Different from the “industrial” smile at the event, the 38-year-old star laughed naturally and comfortably when being with friends.

Song Hye Kyo confirmed his divorce with Song Joong Ki in June 2019 after nearly 2 years of marriage. The famous actress returned to being single at the age of 38. Previously, the marriage of Song Hye Kyo and Song Joong Ki was loved and supported by fans in Asia. They were charmed from the movie “Descendants of the Sun” and the couple’s 2017 wedding was considered a major event of the Korean entertainment industry that year.

Many people believe that the divorce does not affect too much life and spirit of Song Hye Kyo. Different from her ex-husband, Song Joong Ki, chose to “stay hidden” and focus on the new movie, Song Hye Kyo frequently appeared at domestic and foreign events. The beauty of beautiful people also received compliments. She changed the gentle, familiar style, transforming into a luxurious, mysterious and seductive lady.

Song Hye Kyo once announced that she will suspend filming for a while to regain balance in life. However, a source said, Song Hye Kyo will appear in a movie project called “Anna” by Lee Ju-young. This will be the first movie project that Song Hye Kyo appeared after divorce Song Joong Ki.