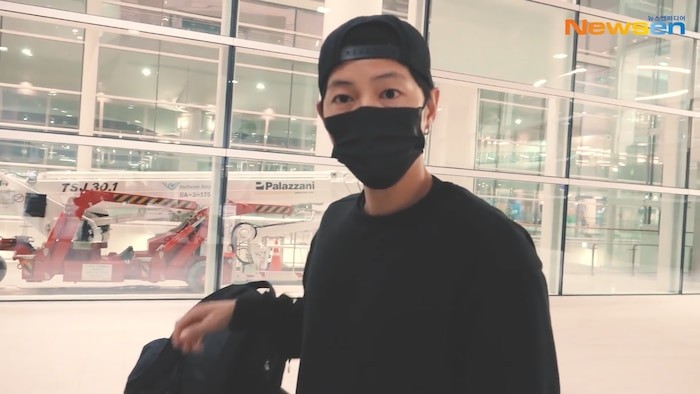 lovekpop95- Song Joong Ki put on earrings, came back from COVID-19 epidemic area: Enter self-Isolation 2 weeks!
According to a report from OSEN on the morning of March 24, Song Joong Ki completely stopped filming the Bogota film project abroad due to Covid-19’s influence. The same morning, the male star landed safely to Korea via Incheon International Airport. Because of returning from Bogota, Colombia, through Los Angeles of the United States, the male star has to be isolated for two weeks at home.

On this day, Song Joong Ki wore a black hat, dressed in a simple black T-shirt and a careful mask. It is especially impressive that the attention of the male star’s fans and fans is that he wears earrings. Previously, the producer of Bogota said, “As soon as the cast and staff return, they will follow the quarantine process according to Korean government policy.”

Earlier, the legal representative of Song Joong ki also applied to the Seoul Construction Department to change the design of Joong Ki’s house in Iteawon district.
Song Joong Ki’s HISTORY D&C management company told OSEN: “When he left Incheon International Airport, he didn’t have any special symptoms (like fever or other symptoms). Currently, Song Joong Ki has no symptoms, so he went home and tried not to go out, to be isolated for two weeks. ”

Actor Lee Hee Jun – his co-star who returned to Korea before Song Joong Ki one day was reported to be at home and isolated himself.

Bogotá has been considered one of the most anticipated Korean works in 2020. It tells the story of a Korean who immigrated to Colombia and settled and lived in a strange land. The film also garnered attention when it came to popular actors such as Song Joong Ki and the effort to film in a foreign location. After a long time of preparation, the film started shooting in Colombia in January with the support of local officials. However, with the outbreak of Covid-19, the production team considered whether to continue the production process or not.

It is expected that Bogotá will be released in cinemas in the second half of 2020. The film will feature Song Joong Ki, Lee Hee Joon, Kwon Hae Hyo and Juana del Rio.