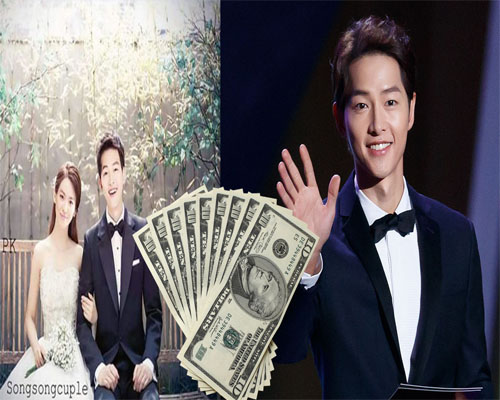 Immediately after the divorce actor Song Joong Ki rarely appeared in the media, instead he worked hard on films with big contracts. Making his fortune increased dramatically since divorcing his ex-wife.
Before filing for divorce, Song Joong Ki and Song Hye Kyo owned common assets of over 200 milion usd. They both own many real estate, cars … and many expensive advertising contracts.

After leaving the army and filming the movie Descendants of the Sun in 2015, Song Joong Ki invaded the Chinese market. A Chinese newspaper revealed that in just 6 months, he earned 60 billion won with receiving 10 more advertising contracts in Mainland.

Song Joong Ki and his family are living in a 226-square-meter villa in a busy neighborhood in Bangbae-dong district (Seoul), which costs about 2.5 billion won . In addition,Song Joong Ki bought a private house in the vicinity of Seoul, worth about 10 billion won in January this year. The villa is 602 square meters, has 2 main floors and 1 basement.

In addition, the parents ‘parents’ house in Dong District, Daejeon City has also become a place to check-in and travel, attracting many tourists, especially young people. It is estimated that Song Joong Ki’s total assets now amount to more than US $ 80 million.