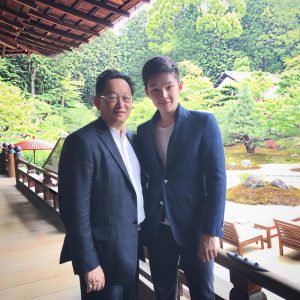 Across the Cnet forums, A lot of opinions and rumors about Song Hye Kyo’s new lover is Eric Tse. So who is he?
With a gift from his parents, Eric Tse joined Forbes‘ billionaire list, when he was richer than Donald Trump.

Eric Tse became a billionaire overnight after his parents, Tse Ping and Cheng Cheung Ling, decided to give a fifth of their shares – worth about $ 3.8 billion – in their pharmaceutical company. There are no taxes on gifts or inheritance in Hong Kong, where Sino Biopharmologists is headquartered.

The decision also helped the young Tse become a director and serve on the executive committee, including his parents and sister Theresa. The shares that the four holdings are worth about $ 8.5 billion, according to Bloomberg calculations.

In addition, Tse received an annual salary of HK $ 3.9 million (US $ 498,000) in addition to the bonus. Overnight, the richness of the gift from the parents of this 24-year-old man has put him on the list of 550 richest people in the world compiled by Forbes.

Donald Trump with a net worth of $ 3.1 billion is not the only guy he surpassed. Tse is now richer than director Steven Spielberg ($ 3.6 billion), worth more than Evan Spiegel, Snapchat co-founder and CEO ($ 3.5 billion).

In a company statement, Tse said: “With nominations for billionaire listings or property ratings conducted by the media or other organizations, I will try not to participate in my own name. but participating in those nominations in the name of the Tse Ping family. “

According to a statement from the company, this transfer is to “change the management and inheritance of family wealth”. Tse’s shares will be held through the Thousand Eagles and British Virgin Islands-based Remarkable Industries.

It looks like Tse will be pretty tight-lipped, as his Instagram account was set to private after the news was released. However, there are still people fast enough to get a glimpse of Tse’s life, with images of exchanges with the rich and famous.

A few pictures show Tse next to former NBA player Yao Ming at the FIBA ​​basketball World Cup, posing by the pool with Princess Charlene of Monaco, wrapped around the waist of supermodel Bella Hadid at a Bulgari party in Venice , quite intimate with former French First Lady Carla Bruni and taking a selfie with superstar singer Rihanna in New York. Many of his photos with these celebrities have been annotated with the hashtag #casual.

Other photos of Tse’s rich life include pictures of him flying over the French Alps, swimming with dolphins in the Bahamas or paragliding in Thailand.

Tse was born in Seattle, went to primary school in Beijing, completed secondary and high school in Hong Kong. Tse studied at Tsinghua University in Beijing. Before that, he graduated from Wharton School of Finance at the University of Pennsylvania.

During his time at Wharton, Tse hosted Penn Wharton’s China Summit (PWCS), the annual event that became one of the most widely attended conferences focusing on China at school. American institute. And apparently it’s Tse’s brainchild with classmate Lisa (Xingyi) Wang, after attending in 2014.

“It’s something I would do better as a freshman than a final year student – I want to see my initiative through this university and leave a legacy behind,” Tse said. . “As an international Chinese student, I think it’s best to serve your community.”